They had other improvements to their home they also hoped to address.Their entry was too small to accommodate the boots, jackets, snow pants, shoes, hats, gloves, soccer balls, and swimming suits their family often shed on entering.They were also frustrated with their current windows: poor operability and lack of screens. And, they thought, maybe even a screen porch would be nice.

Solution: A Deep Energy Retrofit. Huh?! You might say.A Deep Energy Retrofit (DER) is a new method of radically reducing energy use in existing homes by superinsulating and tightening air infiltration to the home. DERs often rely on high performance R-5 windows, low-flow faucets and energy monitoring devices to help families measure how much energy they actually use in real time. Marc Rosenbaum of Energysmiths in Meriden NH, a frequent collaborator with Garland Mill Timberframes, helped Ben and Kirsten make sense of it all.

Here’s how it works. Their plan was to dramatically increase the overall insulation of the current home, install new windows and put a small addition on the south side of the home. This addition would be a small sunny office for Kirsten above, and a screen porch below. While Kirsten’s old office off the entry became a natural spot for a new boot porch. But increasing the
insulation alone wouldn’t slow their propane use enough, as they relied on the boiler for some of their hot water. So they included hot water solar panels in the plan so they could get rid of their propane boiler and tank altogether. 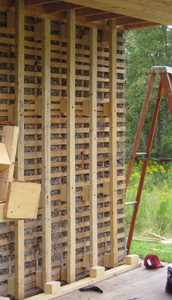 To acheive their dramatic insulation improvement they removed the current siding and bumped the walls out four inches around the entire house. In the new cavity, they sprayed four inches of closed cell foam. They then installed new high performance Thermotech windows (with operable screens) and added cellulose in the existing attic. The new office was built with 1 foot thick cellulose walls and floor complemented by an 18” thick roof package. Because these changes made their house so air tight, they installed a heat recovery air exchanger to keep the air in the house fresh without losing heat.

Marc designed a Solar Domestic Hot Water system to provide 70% of their hot water needs. And KW Management of Nashua, also a frequent collaborator, installed it. Their masonry heater also pre-warms their water when they are using it, and a back up electric element in their hot water tank provides for the rest.

RESULTS
This winter they used absolutely no propane and heated their home with less than two cords of wood. The solar panels and masonry heater heat exchanger covered most hot water needs. Kirsten’s new office is lit and heated passively by a generous southern sun. And when spring came, windows were opened without the ensuing swarm of black flies. The kids have plenty of room to store all of their gear in the new boot porch.And the screen porch…well, Ben hasn’t had time to get the screens in yet. But when he gets some time to work on his house again, the outdoor bug-free evening dinners will be fabulous. They have also been keeping a watch on their electricity use with a real-time monitor. And so far all is definitely going well.
________________________

A note on financing: All of this Ben and Kirsten paid for with equity by re-financing their mortgage from a 6.25% mortgage to a 5% mortgage. Their combined energy bills and portgage payments are lower now than they were before the DER. The $5000 IRS rebate for the Solar Hot Water system, insulation and windows was a bonus.

PACE (Property Assessed Clean Energy Bonds) Legislation: The New Hampshire legislature is considering PACE legislation that would allow families and business to take out very low interest loans to help pay for the type of work involved in Deep Energy Retrofits. The loans are attached to the house, not the homeowner, and are repaid as a part of property taxes. This way, when homeowners sell their home, the debt is passed on to the new homeowner. Municipalities benefit by job creation, higher property values and a reduction in energy use in their towns. Homeowners benefit from very low interest loans provided by the non-profit municipality and the benefit is often an immediate payback; the reduction in energy bills is greater than the increase in the property taxes. We all benefit from a reduced reliance on foreign fossil fuels and the carbon pollution associated with it.